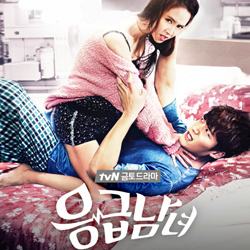 The romantic comedy/medical drama is about a divorced couple whose confused feelings for each other are rekindled when they become reunited years later as interns at the same hospital.

An extracted scene of Oh Jin-hee (starred by Song-Ji-hyo who is very famous in Running Man series in Korea) reading her books after a long day at work as a medical intern.

Have you ever wondered what is it like to feel like to be inside a Korea Drama like Emergency Couple? Lets take a closer look at the picture.

Did you see born in colour signature Macaron Bill and Retro Study Table?

Yes! She is using our korean furniture in her room setting within Emergency Couple drama!

Even our favourite Macaron Pink Joy is also featured right at the back of her bookshelf!

In another scene at her friend's house, born in colour retro display cabinet (floating shelf) is also a featured furniture piece!

Now we know that even on a green painted background, the floating shelf looks especially alluring as well.

Did you notice our minty korean smiley face behind the white korean blinds at the left corner?