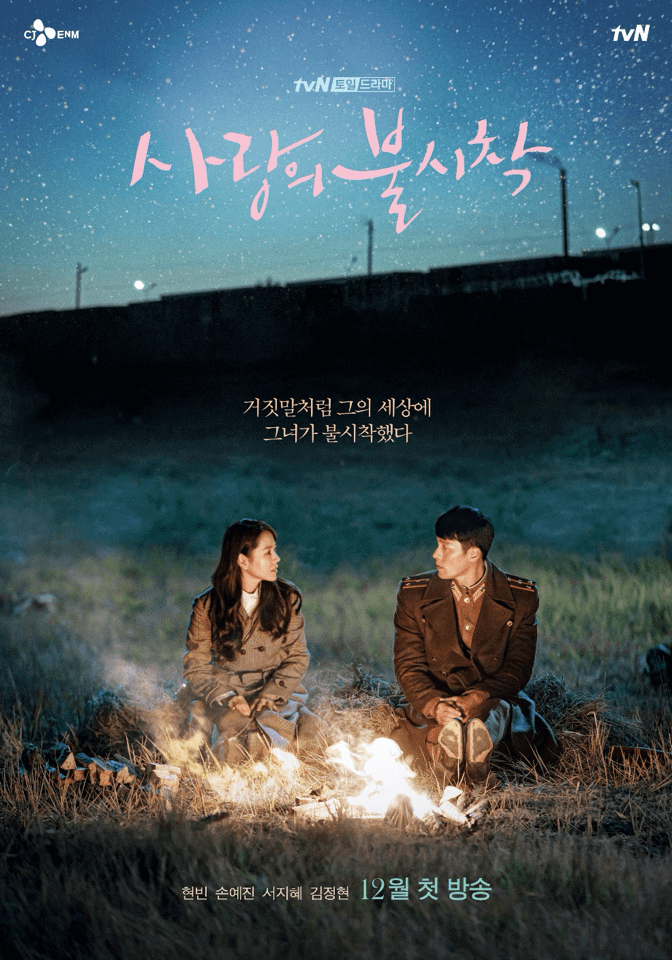 Hello 2021, what a crazy year 2020 has been for us all! Fans of Crash Landing on You, it’s time to rejoice! South Korean actor Hyun Bin and his on-screen partner, Son Ye-jin, have acknowledged that they have been dating for eight months. Their agencies confirmed on Jan 1 – what a great start to the new year!

Crash Landing on You is a 2019 South Korean television series featuring Hyun Bin, Son Ye-jin, Kim Jung-hyun and Seo Ji-hye, directed by Lee Jeong-hyo. The series aired on tvN and Netflix worldwide from 14 December 2019 to 16 February 2020. It is the highest rated tvN drama and the third highest-rated South Korean TV drama in cable television history.

This series is about a South Korean chaebol heiress, Yoon Se-ri (Son Ye-jin), while paragliding in Seoul, South Korea, is swept up in a sudden storm and crash-lands in the North Korean portion of the DMZ.

She then meets Ri Jeong-hyeok (Hyun Bin), a member of the North Korean elite and a captain in the Korean People's Army, who eventually gives her shelter and develops plans to secretly help her return to South Korea.

Having decided to help her go back to the South, he hides her from other North Koreans. Over time, they fall in love, despite the divide and dispute between their respective countries.

In Episode 2, Jeong-hyeok shows Se-ri his very old phone and tells her that dialing “5” will connect her to his office, impressing upon Se-ri that she can only use it in a dire emergency.

She mentions that it is like a hotel concierge service and proceeds to bother him with her silly requests such as lack of body wash and shampoo, and her desperate need for an aroma therapy candle for her bath.

The item featured in this scene is from our Skagen series! Our Skagen Danish Arm Chair can be seen at the corner of Jeong-hyeok’s room.

In the next scene, Se-ri gets out of the shower and is worried by the blackout and tries to call Jeong-hyeok.

She laments about her bad situation and had enough of the surprises since her landing in the North.

The item featured in this scene is also from our Skagen series! Our Skagen Danish Slim and Tall Shelf Cabinet can be seen standing right outside the bathroom.

During the last scene, Se-ri is seen looking around at all the books on the shelf, many of which are piano music sheets and books on Mozart.

She also comes across a flyer from a Swiss music university with a picture of a younger Jeong-hyeok, lingering on the fact that he looks awfully familiar.

The item featured in this scene is also from our Skagen series! Our Skagen Danish Chair can be seen sitting in the study room.

In episode 5, Se-ri is seen pacing in the house, getting excited as she thinks that Jeong-hyeok is returning home. She rushes to the gate and it is actually the village ladies paying her a surprise visit, with sympathetic faces for what they think is Se-ri’s betrayal by Jeong-hyeok.

They inform everyone that Seo Dan declared herself to be Jeong-hyeok’s fiancé, and that she has no morals. They then decided that Se-ri was dumped.

The last item featured in this scene is also from our Skagen series! Our Skagen Danish Bureau Sideboard Cabinet with Flip-down Table can be seen at the back.

Our Skagen series takes inspiration from timeless classic Danish designs, which exudes mid-century inspirations throughout. If you love vintage pieces, then this is for you!

Now that you have seen our features, you can experience being the main character of a k-drama too!
Hurry and get them while stocks last!